Our chiropractic clinic near Minnetonka offers 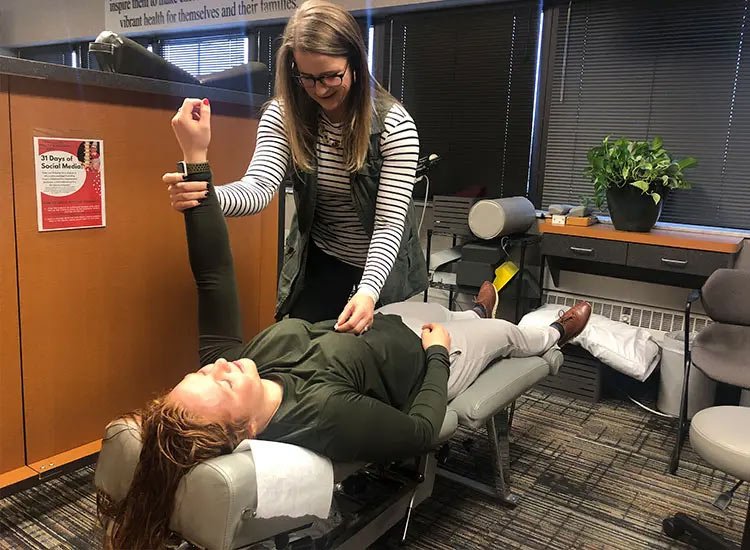 We are a clinic which can provide you with a chiropractor in Minnetonka, Minnesota, who will make every effort to diagnose the true cause of any pain or discomfort you may be feeling, and treat that source of pain. Whereas traditional medical treatment might stop short at recommending pain-killers and medications, we will find the underlying reason for your discomfort and treat that instead. The big difference between these two approaches is that pain-killers do nothing to treat the actual issue, and that means you’ll be obliged to use them indefinitely. Chiropractic care on the other hand, attempts to eliminate the source of the pain, so you won’t require continuing treatment for it.

We provide chiropractic care for your entire family, whether they’re an infant or well into their senior years. After years of service to the community, we have a good understanding of the kinds of aches and pains which are routinely encountered by our fellow community members, and we can deliver the kind of care which reduces or completely eliminates those aches and pains. We also do our best to educate our patients about body structure and function, so that they can take charge of their own wellness and maintain a constant state of optimal health.


We offer a wide range of services at Chiropractic Health and Wellness, our clinic in Minnetonka, Minnesota. All these services are designed to minimize any discomfort you may be feeling, and help you get back on the road to wellness. If you aren’t sure that your injury or your pain can be managed through chiropractic care, do contact us and come in for a consultation. After reviewing your medical history and thoroughly examining you, we’ll be able to diagnose your issues, and give you an accurate outlook on how we may be able to help. Here are some of the services we frequently administer to our patients at the clinic

Symptoms we can help with


Many people who are faced with chronic recurring headaches or migraines are unaware that the cause of those headaches may be coming from a spinal misalignment, possibly in the area of the neck. If this is your situation, we’ll discover it through examination and we’ll be able to realign the vertebrae in your neck or spine to bring about long-lasting relief. Of course, one of the most common reasons people come to our chiropractic center is for the relief of lower back pain, and that is still one of the services we are happy to provide.

Any kind of spinal misalignment or subluxation, can put pressure on the nerves in that area and cause continuing pain. By realigning those vertebrae, the pressure is removed and the pain disappears right along with it. Anyone who has been in an auto accident may have incurred whiplash as a result, stemming from the sudden tremendous impact to the body, and resulting misalignment of the spinal cord. We can diagnose such issues and develop a treatment plan which will help you overcome such an injury, or anything which is similar in nature. Don’t wait. Contact a Minnetonka chiropractor today!

“100% recommend!I came to the clinic to participate in the Ideal Protein weight-loss program. I had a strict timeline that I needed to lose 30 pounds. I had been trying on my own and had lost 8 pounds, but my progress had slowed down considerably. Five weeks of ideal protein and I’m down another 20 pounds! Ideal protein is very strict, but if you follow the protocol you WILL lose weight.If you want to lose weight and do it quickly, IP is the fastest way to do it. No weight loss diet is fun, so you might as well get it over with as fast as possible.The food is pretty good and I found a few staples of IP food that don’t have weird aftertastes and that I’m happy to eat everyday. Ranch dourados, chocolate and coconut bars, and trail mix.Staff at the clinic are super friendly and offer great support through the process. They implemented safe procedure to help reduce the spread of Covid and it feels very safe at each visit.”

“My entire experience with the doctors and staff at Chiropractic Health and Wellness has been nothing short of wonderful. I came to the clinic with little to no knowledge of chiropractic and can genuinely say that due to the expertise of the doctors and the quality of my care I now fully understand and enthusiastically endorse chiropractic care! I am 25 years old and have suffered from chronic pain in my right hip for the last three years. I had tried everything from pain medication, new shoes, and altering my everyday movement and behaviors. Nothing worked. Who would have thought that the unbearable pain in my right hip was actually stemming from a problem in my right foot? Dr. Fargo of course! After just one adjustment to that part of my foot my hip pain was instantly gone for the first time in three years. I now get adjusted once a week to maintain my overall health and wellness. Thank you Dr. Fargo and Dr. Wagner for keeping me healthy and pain free!”

Back Pain Treatment in Minnetonka, MN, 55305

“Excellent staff, everyone is very friendly and professional.They took amazing care of me from day 1!I highly recommend Dr. Fargo's team, they WILL NOT disappoint you.”

“I would definitely recommend Chiropractic Health & Wellness. They do a terrific job explaining the process, getting you the care you need, and all of their staff are great!”

“Dr. Fargo and his staff are very professional, knowledgeable, honest and fun to work with. You won't feel like just another person with pain. They care about you and treat each person with the individual touch that is needed. Do yourself a favor and give them a try!”

“Highly recommend. My experience has been positive overall. Friendly, helpful, & caring staff. Each patient is treated as an individual so you’re getting the care you need for your body’s specific needs. Dr Fargo cares about your overall health & wellness which sets him apart from our previous chiropractor care.”

“The doctors and support team at Chiropractic Health & Wellness are tremendous. They have created an environment for your whole health and their commitment to you is unwavering. So fortunate to have them on my team!”