Our clinic specializes in proven therapies to treat scoliosis

Our Edina chiropractic clinic offer scoliosis treatments. Call us at (952) 835-6750 to schedule your appointment today!

The term “scoliosis” refers to a spinal condition where a person has a curvature when viewed from the front or the back. This curvature often occurs just before puberty, when the body is growing very rapidly, but it can also occur at any age, even in adulthood. When a sideways curve of the spine is determined to be more than 10° on an x-ray, such a curvature would be considered a true“scoliosis”.

Scoliosis is, in most cases, a deformity that also involves rotation. That is why people with scoliosis will often have a raised area on their rib cage or in their lower back. This “hump” is a result of the vertebrae (spinal bones) and their associated ribs rotating. This is one of the hallmarks of scoliosis. When scoliosis is severe enough it may require surgical fusion, which means that screws and steel rods are installed in the spine to straighten it and prevent the curves from getting worse. Most scoliosis curves will not progress to the point where surgery is necessary, especially if appropriate action is taken early enough. You must be aware, however, that, especially in adolescents, curves can progress very rapidly to the point of requiring surgery. Therefore it is essential to take even smaller curves seriously and to work to reduce and prevent them from progressing.

It has been assumed (incorrectly) that once a person’s skeleton matures, there is no risk of progression (i.e. getting worse). Such is not actually the case, as adults generally see scoliosis curves get worse as they age. Current research indicates scoliosis curves in adults progress at a rate of .5 to 2 degrees per year (the mean rate of progression is actually 1.47°). The point is that, even if you are an adult with scoliosis, it is essential to properly identify and monitor potential progression. While all of this may sound dire, there is a range of conservative treatments available which can be effective when scoliosis is discovered. Treatment options include scoliosis specific exercise, traction therapies and even bracing. If you, or someone you know, has scoliosis, then it is essential that the condition be properly assessed so that appropriate treatment can be administered. In most cases scoliosis and other spinal curvatures can be improved or their progression halted before surgical intervention is required.

The most common form of scoliosis is known as “adolescent idiopathic scoliosis”. An “idiopathic” scoliosis is one for which there is no known cause. This particular type of scoliosis is of great concern because it develops in children and can be rapidly progressive. The time of greatest risk for children with scoliosis is between the ages of 10 and 13. This is a time when adolescents go through rapid growth and such growth can cause even small curves to worsen dramatically in a short period of time. While scoliosis of this type usually affects adolescents it can also affect children as early as infancy. While it is true that, with this type of scoliosis, we do not understand the cause, we can usually predict, based upon the age, curve size and degree of skeletal maturity, how likely such curves are to worsen. It is especially important that children have a proper evaluation and, even if they have small scoliotic curves, all curves should be carefully monitored and treated appropriately to curve magnitude and risk of progression.

There is another type of scoliosis that affects a large percentage of the population and this one affects adults. It is entirely possible for a person who never had scoliosis as a child to then develop such curvatures in adulthood. Most often such adult-onset scoliosis occurs because of progressive spinal degeneration that happens with aging. What occurs is that the forces of gravity, compounded by time, cause degenerative areas to worsen and a downward spiral of degeneration and curve progression occurs.

It should be noted that scoliosis and other similar misalignments can worsen when a person has poor posture or experiences any kind of traumatic incident. This is why it is especially important for people with scoliosis to undergo regular chiropractic care for general maintenance and also the more particular therapies geared to scoliosis.

How scoliosis is diagnosed

Sometimes someone close to an adolescent with scoliosis will identify the condition because visual alterations in posture become more and more apparent. It may be that the shoulders and pelvis don’t seem to be quite level or that the shoulder blades stick out more on one side than the other or there is an asymmetry in the waistline. When scoliosis is suspected, a physical exam can be administered to evaluate potential curvatures. There is a special test known as the Adams forward bending test during which the patient is asked to bend forward at the waist and the doctor then observes and measures any deviation in the level of the rib cage. In assessing scoliosis curves, if it is observed on Adam’s test that the rib cage is unlevel by more than 4° (5° in the low back), then x-rays are warranted to further evaluate potential scoliosis. If in reading this, you wonder about someone that you know, there is a simple app that you can use to make an assessment of a child who you suspect of having scoliosis. Simply go to https://app.scoliscreen.com/ and follow the instructions to get an assessment of a child’s suspected scoliosis.

How “corrective” chiropractic treatment can help

Traditional chiropractic care and physical therapy have not been shown to consistently change or even prevent the worsening of scoliosis. However, chiropractors trained in Chiropractic Biophysics can design a unique care plan including mirror image adjustments, scoliosis-specific exercises and spinal traction (stretching) that has the best potential for managing scoliosis successfully. Here are the steps that a CBP chiropractor would go through to determine the need for scoliosis-specific treatment:

It is usually the case that, given the nature of scoliosis, it will take a number of sessions, including postural adjustments, scoliosis-specific exercises, and traction, to reduce scoliotic curves. When a program of care is recommended, the scoliosis corrective chiropractor at Chiropractic Health & Wellness in Edina will explain the treatment plan in its entirety.

In cases with larger curvatures (usually greater than 20°), scoliosis bracing can become necessary to prevent the progression of the curve and avoid the necessity of surgical spinal fusion. The type of scoliosis bracing done at Chiropractic Health & Wellness in Edina, Minnesota, is known as ScoliBrace. ScoliBrace is a 3D super-corrective brace designed by Dr. Jeb McAviney in Australia and manufactured in the USA. ScoliBrace is unlike any other bracing product on the market in that it seeks to do more than just hold the curve in place. ScoliBrace uses the latest computer-aided design and manufacturing techniques to create a brace that has the potential to substantially correct scoliotic curves in many cases. In those cases which are not correctable, it is far more effective than traditional bracing at preventing curve progression.

As always, the primary concern of our experienced scoliosis doctors is the long-term health and well-being of the patient, so we take the greatest of care in making sure that all procedures are done safely and professionally. If we find that your scoliosis is beyond what we feel we can effectively treat, we will make appropriate referrals and, if necessary, we will co-manage cases with scoliosis surgeons in the area.

Call for a free examination

If you suspect that you or someone you know has scoliosis, you should contact us immediately for a scoliosis evaluation in Edina at Chiropractic Health & Wellness. Your scoliosis care will be administered by a highly skilled and qualified specialist after you have received a thorough consultation and examination with the doctor.

Call today to set up your free consultation and examination, so you can begin to improve your spinal alignment and scoliosis and so you can enjoy optimum health throughout your life.

Learn the basics about Scoliosis and Scoliosis bracing technology.

Learn how it may be affecting your spine and how to speed your journey to better health. 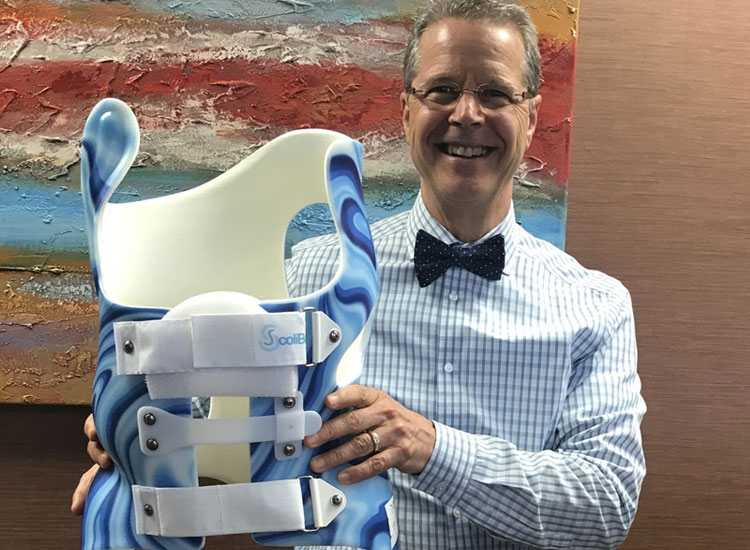